A Real Estate cycle last 76 years. Real Estate is a High Order Capital good and the price level of

Increased taxation and expensive hard to get mortgages adds pressure on a market which is already suffering from lower demand as a result of lower Real Income and higher supply as a result of the Real Estate bubble and the retiring Baby boom generation..

During the Weimar hyperinflation one month's rent barely paid for one loaf of bread. Many tend to forget that Real Estate (especially a home) wears out, gets old, is badly isolated,...During recessions and depressions Authorities do all they can to keep rents as low as possible (housing is part of the inflation indexes) and as a rule block rents during hyperinflation. As a result Landlords see their income and right amputated, the income on their property disappear and try to sell.

My parents bought a small three-bedroom house in Texas in 1960 for the seven of us in the family. My brother and I shared one bedroom, my parents had the center bedroom and my three sisters shared the back bedroom. The house cost about $12,000. Today it’s probably worth $120,000. My parents put down about 15%, that’s all they could afford on a 15-year mortgage.

They didn’t look at it as an investment. At best they may have considered it a sort of savings plan. Owning a house was viewed as an expense just like operating a car. You might need shelter but painting and small repairs were constant. If someone had gone to them and suggested it was a great investment because housing could only go up, they would have looked at him like a goat with three heads. Housing an investment? Are you kidding? At best you might break even and it would take 18 months to sell.

Home price drop in the USA exceeds the Great Depression. Home prices have fallen 26 percent since their peak in 2006, exceeding the 25.9 percent drop registered in the five years between 1928 and 1933, the housing data company said in a report on Monday. Prices fell 0.8 percent over the month...more

The main difference between Real Estate and Stocks is that it usually takes a generation before real estate losses are recovered. Stock market losses occur more frequently, can be severe (-50% in 2008), but recovery of all losses often happen in less than a year time.

How to dig a financial hole of $/€ 600,000!? Amazing is that many Europeans refuse to LEARN from what happened in the USA and Spain and still BELIEVE what the Authorities say...In 2005 RIGHT BEFORE the American Real Estate busted, Bernanke himself testified that there was no Real Estate Bubble and that it was safe to buy property. In 2006 the bubble busted and today somebody who bought a house in 2006 at  $ 500,000 and made a $ 100,000 down payment has a debt of $ 800,000 (capital plus interest). His house however is worth ONLY $ 200,000.  The end result is that instead of being better off by buying a property, those people digged a financial hole of $ 600,000 ! Those who have the guts to watch the clip to the end will understand what we are talking about...

A landmark ruling in a recent Kansas Supreme Court case may have given millions of distressed homeowners the legal wedge they need to avoid foreclosure. In Landmark National Bank v. Kesler, 2009 Kan. LEXIS 834, the Kansas Supreme Court held that a nominee company called MERS has no right or standing to bring an action for foreclosure. MERS is an acronym for Mortgage Electronic Registration Systems, a private company that registers mortgages electronically and tracks changes in ownership. The significance of the holding is that if MERS has no standing to foreclose, then nobody has standing to foreclose – on 60 million mortgages. That is the number of American mortgages currently reported to be held by MERS. Over half of all new U.S. residential mortgage loans are registered with MERS and recorded in its name. Holdings of the Kansas Supreme Court are not binding on the rest of the country, but they are dicta of which other courts take note; and the reasoning behind the decision is sound...click here for more... 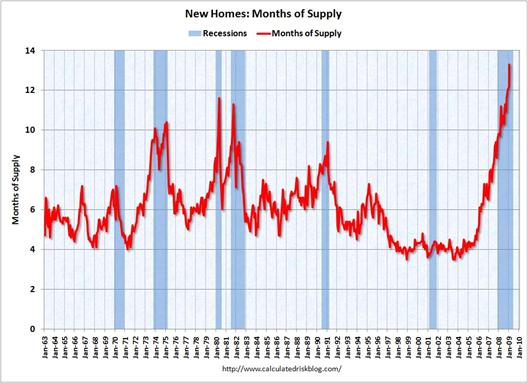 More bad news for Real Estate. The number of foreclosures in the US keeps going up. What people are looking at is the schedule of mortgage resets for option ARM loans [also called liar loans]. These will begin to reset in a couple of months and the process will not peak before 2011. 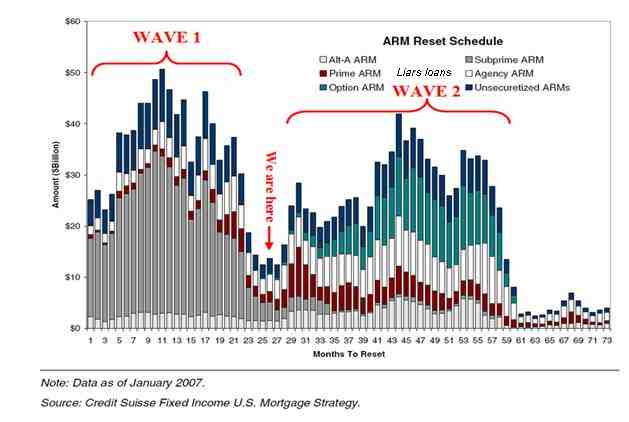 “’We believe there are in the neighborhood of 600,000 properties nationwide that banks have repossessed but not put on the market,’ said Rick Sharga, vice president of RealtyTrac, which compiles nationwide statistics on foreclosures. ‘California probably represents 80,000 of those homes. It could be disastrous if the banks suddenly flooded the market with those distressed properties. You’d have further depreciation and carnage.’

According to the Wall Street Journal: “Ronald Temple, co-director of research at Lazard Asset Management, expects home prices to fall 22% to 27% from their January levels. More than 2.1 million homes will be lost this year because borrowers can’t meet their loan payments, up from about 1.7 million in 2008.” (Ruth Simon, “The housing crisis is about to take center stage once again,” Wall Street Journal)

A similar pattern is used by Spanish banks. (Spanish banks over invested in Real Estate as they were sure trees would grow all the way into heaven)

This is a very interesting long term chart of Real Estate. To see just how unusual recent price activity has been, take a look at Yale economist Robert Shiller's inflation-adjusted housing chart, going back more than a century.

The chart makes it crystal clear that the current overvaluation of real estate in real terms grossly exceeds the one during the 1920s. The coming correction in real estate will be protracted and gut-wrenching, with an expected cumulative effect that is much worse than the Great Depression.

The Real Estate Boom was nothing more than a desert mirage. The direct result of fractional reserve banking and the creation of money out of thin air.

Monetary inflation is even more deceptive - or dangerous - when it is working with asset deflation.

What happens when monetary inflation meets asset deflation is not understood by most of the population. Hidden within the convergence of those two fundamental forces will be the likely "solution" to the current housing crisis, as well as opportunities for astute individuals to protect and even increase their net worth during a time of falling real home prices."

When I discussed the imminent  crash of the Japanese Real Estate and Stock market in 1989, experts said I was crazy. Japan was an overpopulated island and for this reason alone a Real Estate crash would and could never occur. And yet, 15 years later, a house selling for 220,000 yen in 1989 can be bought for 80,000 yen. Not only has Japanese real estate crashed, but the Yen has also...a terrible shock for all 1989 non-believers. Today similar conditions occur for British real estate owners: on top of sliding British real estate prices, the Pound is also crashing.

People are so naive to believe that what happened in Japan would never occur in the United States, Australia, the City of London, the Costa del Sol in Spain or Belgium...and yet it is happening in all of these countries!

Stock markets can come down swiftly and loose 50% in only weeks time. Traditionally, they recover quickly (often in less than 6 months' time). Historically, Real Estate markets need about 75 years to recover. In some cases, like Florida, they never recover.

December 2008, the commercial Real Estate bubble is - as expected - bursting. In November analysts at Credit Suisse said two big commercial mortgages that had been packaged into securities in the past year were likely to default. The rapid deterioration of these loans fed worries that the weakening economy and higher unemployment rate would drag down the $800 billion market for commercial-mortgage-backed securities, or CMBS, which so far has withstood the credit crisis with low delinquency rates.

Today one can buy Real Estate below $ 10,000. Some of these opportunities are wise investments! The housing market for the next several years will undoubtedly take a severe hit. In the end the torrential flood of homes that come to market for sale will be bought at much lower prices by my children as well as yours at prices which are affordable. Those who count on 'a dip' in the market will be amazed how deep the Real Estate market can slip!

Only $ 5,000 for a three-bedroom house! This is a foretaste of what Spanish builders may expect in the near future.

July 23 (Bloomberg) -- Fannie Mae, the largest U.S. mortgage finance company, couldn't find a buyer who would pay $6,900 for the three-bedroom house at 1916 Prospect St. in Flint, Michigan. So broker Raymond Megie, who is handling the foreclosure sale, advised cutting the price to $5,000.

There are also some people out there -- and I know at least one of them -- who decided not to put their money in the stock market but rather base their retirement portfolio on rental properties, typically a very safe and responsible that. Nonetheless, the recession has now gotten so bad that even these types of investors are suffering.

Anecdotally, the story I heard from one poor soul is that three of four of his rental tenants are least three months in arrears on their rent, and this has put him in arrears on his mortgage payments. It would be a tragedy for someone like this to wind up in bankruptcy and without retirement money because of the ripple effects of this recession.

Real Estate opportunities in the USA I

The Russians came, saw and left