Upon request ALL NEWS and DAILY RESEARCH will come under one monthly window. (like it used to be in the past): NEWS NOVEMBER (open) , UPDATE NOVEMBER (subscribers)

In order to surf to the core of the site (Investment department), you must first login and click INVESTMENT PYRAMID. All investment items are listed in the Column to the RIGHT.

Note that the box to the right in the Home page lists the latest articles.

Note that at the bottom of each window you can often find Articles pertinent to the section.

PLEASE sent us feed back...the more feedback, the better we can make the site.

Super Mario and girlfriend Marie-Antoinette Lagarde could not have choosen a worse place to hold the G-20 conference. Cannes has been turned upside down but today people are marching the streets of Nice shouting slogans not against Banksters but rather about the increasingly unaffordable cost of living: FOOD (a low order consumer good).

LWAYS is part of a hyperinflationary depression and this time won’t be different. What is happening in Nice today can happen in Cannes, Paris and Brussels tomorrow. What started in Tunesia has clearly reached the European mainland. I guess not a single European leader has expected this as they are all -like Marie-Antoinette just before the French revolution - advising people which have no bread to feed their children - to serve them “Cake” instead.

Rather unbelievable is that with all the bells and wistles there still are people advocating a DEFLATION instead of a Hyperinflationary Depression.

The one thing Europe was trying to avoid, contagion spreading to Italy, has happened. Because of the introduction of the Euro the only way the Investors have to short a currency is to short the Bonds of the country in distress. And this is exactly what they are doing. Yesterday it was Greece, today Italy, tomorrow will be Spain, France or Belgium. By shorting the bonds they are killing the Pension funds, Insurance co's and Banks.

Whatever will happen in Greece, Hyperinflation is knocking at the door. If Greece leaves the EURO they will be the 1st ones to taste its bitter flavor. If not it will be the Eurozone or any other European country who decides that enough is enough.

As long as one is prepared and doesn’t hold any of those wicked dangerous worthless financial instruments, the damage will be minimized. Those who refuse to see the reality and keep BELIEVING what the charlatans keep telling us will pay it with all of their savings. It happenend over an over in the past and it is about to happen again.

Which side do you plan to be on? 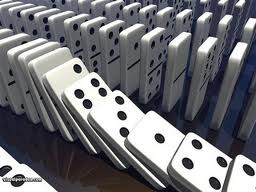 The Treasury/Bond crash we forecasted a couple of years ago is unfolding in domino style.

Interest rates signal the end is near. They did so in Greece and we are seeing clear signs in Portugal, Spain and Italy and even Belgian that rates are picking up. The Greek scenario will be played over in other countries of the EU but also in the USA and 2012 will be critical.

As interest rates rise, the loss on Bonds and Treasuries is painful. Ten Year Italian treasuries have fallen to 90% of their nominal value while only months ago they sold at a premium. [pension funds, insurance co’s and banks are by law forced to hold large amounts of this crappy paper].

Interest rate rises because the public and the investors stop trusting Government. So far Government has been guaranteeing the Banks and has bailed these out each time it was a matter of national security. What the politicians don’t seem to grasp is that once the People start to mistrust their actions and see they have no clothes, it’s GAME OVER. And the prelude to Game Over is Higher interest rates.

But the natural forces always have the last say and the longer Authorities rig interest rates, the stronger the following action. It always was so and always will be that way.

Those who refuse to adjust their investments and continue to believe the lies of the Authorities and live in denial, will loose all of their savings. History is a live proof of this statement. Best case scenario Pensions and life insurances will be buried under a hyperinflation tsunami. What is left of it will be eaten away by the subsequent debt moratorium in a Zimbabwe style.

Some readers complain that what we publish is too negative, too fearful and doesn’t contain any positive aspects. To be honest, we would appreciate to see readers sending us emails with any positive news and any tips. We can’t think of any and even worse, everything we look at in dept is in fact worse than it appears….because it has been window dressed by the authorities for too long.

As a matter of fact, I started to forecast what is happening today in 2004 and I remember giving a presentation before a Millionaire’s club. Ever since EACH PREDICTION which I made became a bitter reality. I forecasted the Real Estate bubble would burst and the crash of the financial sector well in time….Today I forecast that we haven’t seen the worst…and I realize this is unfortunately no positive news. Better keep your breast wet

It is not only the financial markets which are in grave danger. The whole world is in turmoil and it will get a lot worse before it gets better (expect a World War). Hard to rate a War as a positive happening and the best one can do today, is to prepare for the worst. To pretend it all won’t get that bad is deny History in general and Monetary history in particular.

On the new site we have updated the Point and Figures charts (which are the most important ones) in the sections of Silver, $-Gold, US-Dollar, Euro-Gold, Sterling Gold, Swiss Gold, Yen Gold,… In each section we have, where possible added a short term live price quotation. Don’t forget to check the charts of Gold expressed in all major fiat currencies for a correct image of the reality.

Be informed there are many extremely interesting patterns unfolding which will impact the financial markets over the next couple of months. Remember to act NOW and not when the Media tell to and it is too late….Goldonomic is most of the time too early….but better be early, safe and good than late and sorrow. Be part of Goldonomic and make sure you're also doing the right thing...$ 575 can be the best investment made in 2011!